← back to
Signature Sounds Recording Inc.
Get fresh music recommendations delivered to your inbox every Friday.
We've updated our Terms of Use. You can review the changes here.

Your Heart Is A Glorious Machine 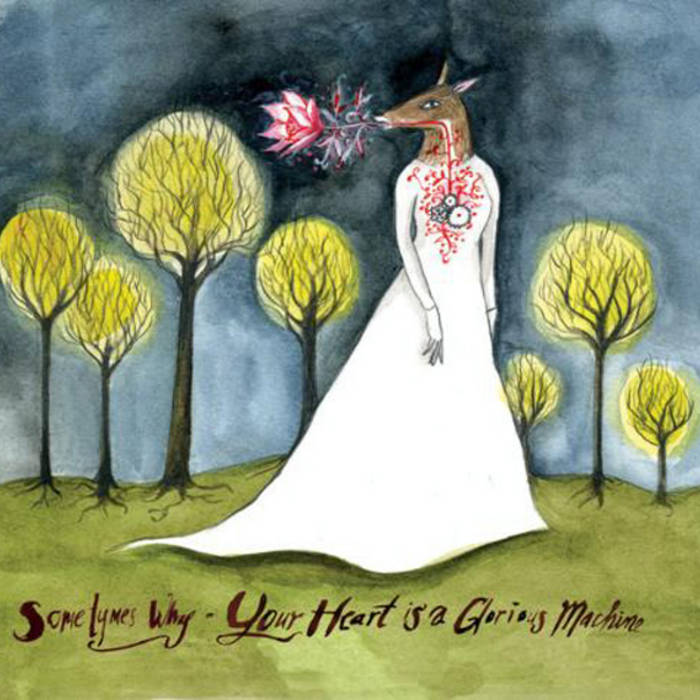 You might know the three women of Sometymes Why as singers with one of their other bands. Aoife O'Donovan (Crooked Still), Kristin Andreassen (Uncle Earl) and Ruth Ungar Merenda (The Mammals) have been at the center of a creative revolution in the acoustic stringband scene for the past few years.

With Sometymes Why, Aoife, Kristin & Ruth create music that moves past the "stringband" label entirely. They sing their own songs and back each other up on Wurlitzer, glockenspiel, high hat & tambourine. They appeal to a part of their audience (and a part of themselves) that's more aligned with Feist, Joni Mitchell, and Bessie Smith than by Bill Monroe and the Bluegrass Boys.

Their home-made debut album (a set of rehearsal recordings which they ultimately released) "became a hot item among fans of all three women's regular bands, and not just for its racy semi-novelty track 'Too Repressed,'" says No Depression (referring to O'Donovan's ballad in which she fantasizes about a blue eyed singer in a bluegrass band).

But the band is best heard live. "There's an instantly appealing quality to the trio-harmony blend of their voices, and in live performance they relate to each other with a charm and ease that radiates to the audience," said No Depression, which claimed that Sometymes Why's impromptu Sunday morning set in a parking lot at North Carolina's epic festival Merlefest "stole the show."

Since their first show at the Sidewalk Café in New York City in 2005, Sometymes Why has played extensively in the northeast, toured across Ireland, and joined their friend, Chris Thile (Nickel Creek, Punch Brothers), as the opener on two sold out tours.

They were songs that fell through the cracks - long forgotten, ignored, or locked away in some special place for a later use that may never come. These songs finally emerged as the basis of something new in 2004, when Kristin Andreassen (Uncle Earl), Ruth Ungar Merenda (the Mammals), and Aoife O'Donovan (Crooked Still) decided to begin performing together. By some unagreed-upon combination of coincidence, design, and accident - the trio took those secret songs and, via an arresting DIY debut album and a series of riveting live performances, gave birth to an underground sensation they called Sometymes Why.

Your Heart Is a Glorious Machine is the second Sometymes Why album. Produced by José Ayerve (Winterpills, Spouse), Glorious Machine finds Sometymes Why taking a step out of the shadows, while continuing to nurture the languorous, luminously intimate pop that first inspired them to pursue their collaboration more intently. Sometymes Why first came to be in the dark, quiet corners of the string band renaissance. Fans of each other's respective bands, Andreassen, Merenda, and O'Donovan had performed together in various contexts, both formal and informal, for years. "In 2004," Andreassen recalls, "we went to an afterparty in Brooklyn. I sang 'The Seasick Dawn,' and those two harmonized. It sounded too dreamy to not want to do it again."

Every moment of Your Heart Is a Glorious Machine is underpinned and illuminated by the palpable warmth and camaraderie of the trio. "It is amazing to be a part of a band that includes two of my closest girl friends," O'Donovan concludes. "It feels like a sisterhood, a club. It's very cathartic to be singing these original songs that have so much weight in all of our lives, and not to be singing them alone - to sing them together."

Sometymes Why is a mesmerizing trio of modern-day sirens. Their vocal intensity, sparse arrangements, and passionate lyricism whirl into the air and cut a cyclone's path through the heart. Aoife O'Donovan, Ruth Merenda and Kristin Andreassen have honed their recipe for ruthless tenderness with utter disregard for conformity or convention. ... more

Bandcamp Daily  your guide to the world of Bandcamp